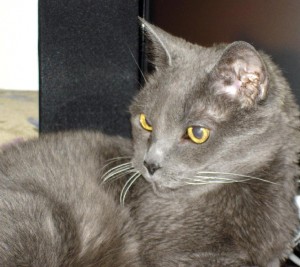 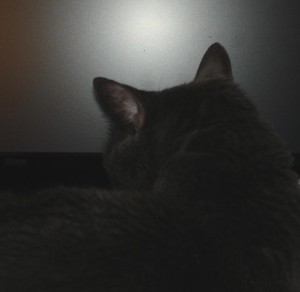 In the final days of my cat, Natasha’s life, was human comfort or feline comfort my priority?

Already a spectral presence, frighteningly thin, weak, and silent, my dying cat took up residence under the bed exactly far enough from either side that she could not be reached. I lay on the floor, my arm outstretched towards her as far as possible, begging her to please come out where I could stroke her. Those great liquid eyes stared back from a place I couldn’t go, a place where pain and exhaustion took her when they became her new mistress. It was a contest I couldn’t win.

I cried to her to please not die under  my bed where I couldn’t touch her.  Again, those big, empty eyes turned towards me at the sound of her name: the end of her tail flicked. I still don’t know whether her tail registered happiness that I was near or annoyance. Like most of my species, I needed to believe my life made a profound difference to hers.

In the end it did. I chose to stop her suffering prematurely…and mine. Always the supposedly good human, I had to take control of her death as I’d always had control of her life.

I have to remind myself now of the times when I was sure I made a happy difference in Natasha’s 16 years, of the affectionate head butts, the late night snuggles, even the cold shoulders I received when I was away too long: the rejection that seemed to say Hey Human, pay more homage to your cat next time!

For the last two-and-a half years of Natasha’s life I measured every day in 100 ml dosages of the subcutaneous fluids I painstakingly administered to her, giving her failing kidneys another 24 hours of usefulness and another day of the pleasure of my company. Eventually the fluids strained her failing heart.

In the end the decision was a human one. The only feline input was the big void of her eyes staring back already near the other side of life, the place we humans have a really hard time with. I pleaded with her not to die under my bed, and finally when her weakened body couldn’t fight me off, I overpowered her and whisked her off to the vet for a professional analysis of what I already knew.

Did she want a quick release from her suffering, or was it human suffering I was more interested in ending?

I only know her suffering presence is gone from under the bed. For me now, imprinted in my mind’s eye is the slender, regal gray cat whose whole tail shuddered with joy, I’m certain, the moment I entered the room.

We humans  interpret the world so full of our own importance.

I coach creative people who want to live an artful life.